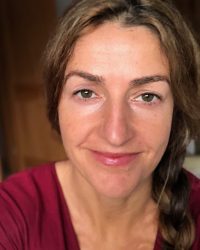 Nicola’s experiences of yoga began in her teens. As a young adult, she ‘found’ herself during a residency in an ashram and when sitting in zen traditions. She moved to Roberts Creek in 1994 and in 2000, began offering yoga to the surrounding communities. Nicola dabbled with trainings in many yoga lineages but found home in the Iyengar method. She honed her teaching skills under the guidance of Louie Ettling, who apprenticed with Wendy Davis, both were inspired by instruction with BKS Iyengar. Nicola has been a student of Geeta and Abhijata Iyengar on several occasions and a patient in RIMYI medical classes for reproductive health. She has received extensive training in Holistic sex education, Yoga for scoliosis and Yoga in pregnancy. Nicola is particularly passionate about supporting women in all stages of life. In 2015, she experienced the birth of a son at home peacefully in the tub and knows enlightenment is accessible in the deep Love surrounding everyday family life.